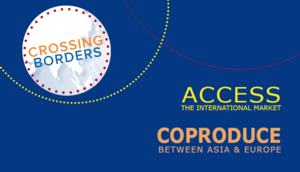 Crossing Borders is a training programme for documentary professionals in Europe and Asia looking to access the international documentary market. The programme has so far taken place in China (2010), Malaysia (2011 & 2013), Indonesia (2015) and South Korea (2012 & 2016).

The Crossing Borders programme aims to bring together filmmakers and documentary experts from both Europe and Asia, who are highly motivated to collaborate with each other across national borders with the ambition to enter each other's markets both artistically and financially. Crossing Borders is organised by EDN and Documentary Campus and presented in partnership with FINAS – The National Film Development Corporation Malaysia and MyDocs.

This year's edition of Crossing Borders consists of four sessions: a development workshop kicking off the programme, a separate online session focusing on story development and trailers (scheduled for September), a pitch training workshop taking place in October in Leipzig, Germany (also see Crossing Borders Part 2) and a distribution & outreach workshop with presentations to financiers and sales agents in December.

To be eligible for Crossing Borders you either have to be an Asian resident with a company based in an Asian country or be a European with a European company address. Projects must either take place in Asia or have an Asian angle / relevance. The language of the workshop is English and all applications must be in English.

Below you will find the list of selected projects for the 2017 edition of Crossing Borders. A PDF overview incl. the synopsis of each project can be found here.

SELECTED PROJECTS FROM OTHER ASIAN COUNTRIES:

Crossing Borders is an international training programme launched in 2010 by Documentary Campus and the EDN – European Documentary Network. It brings together filmmakers and documentary experts from both Europe and Asia, who are highly motivated to collaborate with each other across national borders, and have the ambition to enter each other’s markets both artistically and financially.

Through one-to-one sessions with recognized professionals and trainers from around the world, the programme offers creative and practical support for targeting a project for the international market. The aim is to create an invaluable network between Europe and Asia and to furnish the participants with the necessary knowledge and contacts for their future work on an international level. For more information on previous editions of Crossing Borders and examples of participating projects and success stories visit www.documentary-campus.com

Crossing Borders is an initiative by:

In partnership with FINAS – The National Film Development Corporation Malaysia and MyDocs: