In this monthly interview series EDN focuses on one of its many members to show both members in the spotlight and the diversity of the EDN membership group. 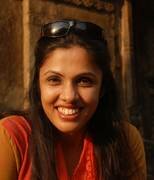 Our EDN member of the month for April 2013 is Sara Afreen, Beginning Production, Bangladesh.

Sara Afreen is one of the very few young upcoming producers from Bangladesh. She graduated as an architect, did her career in advertising and communication, before enrolling into filmmaking with her debut short production titled Stories of Change (2008). Sara’s recent feature-length creative documentary Are You Listening! (Kamar Ahmad Simon, 2012) was the curtain-opener of Dok-Leipzig in 2012, and won the ‘Grand Prix’ from Cinéma du réel in 2013. It was awarded as one of the ‘Best Pitch’ in the ‘Asian Forum for Documentaries 2011’, along with grant awards from IDFA and Visions Sud Est. Sara has been an EAVE Producer participating in ‘European Producers Workshop 2012’ with her first feature script ‘Silence of the Seashell’. With the same script she is participating in the upcoming ‘Cannes Producers Network 2013’ as well. Sara has produced more than 30 top-rated television commercials, and is currently running her own company BEGINNING Production with her partner-director Kamar Ahmad Simon. The company is dedicated to support 3600 film production in Bangladesh.

EDN has talked to Sara about making documentaries in Bangladesh and about her latest production Are You Listening!, which just won the Grand Prize at Cinéma du réel.

EDN: When did you establish BEGINNING Production and what was the motivation for starting your own company?

SA: I always wanted to work independently and make films of different kinds; tell the stories of common people and their everyday life in small details, and their way of celebrating the life as well. So, it was in 2008 when I decided to start producing films under the banner of BEGINNING Production.

EDN: What made you take the shifts from architecture to advertising to filmmaking?

SA: I studied architecture out of passion, but never wanted to do the stereotyped work waiting for a fresher. Thus, I ended up working in advertising for earning my bread and butter. Eventually over the years I realized that, it is all about selling for others’ stories. But what I always wanted is to tell the story of my own, and that brought me into filmmaking.

EDN: You are one of the few young upcoming producers in Bangladesh. How is the environment for independent producers there and for documentaries?

SA: Not only in Bangladesh but also in the entire South Asia, ‘Independent Producer’ is not that much an acquainted term. People are yet to understand the role of a producer here and it is mixed up often with the role of a financer; and documentaries are yet to be understood and recognized as cinema. But I feel, this very lacking proposes an enormous opportunity for fresh ideas and diverse collaboration simultaneously.

EDN: How does the financing and production system work? Is there funding available for documentaries?

SA: In the traditional film finance there is very limited funding opportunities for any kind of independent production. Other than the NGO commissions to make propaganda films, there is no fund as such for documentaries.

EDN: What are the biggest challenges producing documentaries in Bangladesh?

SA: Finding local funding is a big challenge for producing documentaries in Bangladesh. Yet, after making, the bigger challenge lies ahead in distributing the film. Traditional distribution system won’t screen a film of shorter than 150 minutes and of any other genre than so-called commercial films. So the filmmakers are bound to find alternative way to distribute the films by themselves.

EDN: Your latest documentary Are You Listening! premiered last year at Dok Leipzig and it just won the Grand Prize at Cinéma du réel. What is the film about and how did you get involved in this project?

SA: Are You Listening! Is about a mother’s dream to ensure a dignified future for her son, its about her jobless husband’s frustration for failing to provide for his family and about a community’s struggle to get back their lost land, since a last tidal surge washed away their land and all their belongings.

In 2009, a tidal surge hit the coastal belts of Bangladesh, leaving a million stranded on an age-old dyke. As a city dweller, we had the privilege to see both the ‘Global Buzz’ and the ‘Local Images’ of climate change. So, after travelling these areas for three months we met these beautiful people. They appeared to be the most spirited people on earth; hardworking, dignified and celebrating life to its fullest. We fell in love, and decided to make this film on them.

EDN: You went internationally with the development of Are You Listening! Can you tell more about how you developed the story and found the financing?

SA: We first got the development support grant from IDFA, after participating in ‘Docedge: Asian Forum for Documentaries’ – a pitching forum in India. By that time, we had already started investing our personal savings, and a local foundation supported us looking at the initial rush and believing in our story. When we were at production, IDFA supported us consecutively with another grant, and we finished the production exhausting all our personal savings along with this. And then Visions Sud Est from Switzerland came on board supporting us with the Post-Production grant.

EDN: Where did you pitch or present the project?

SA: We could not afford to pitch in any other market, other than ‘Docedge: Asian Forum for Documentaries’. It happened to be in neighbouring Kolkata in India. The project got a good exposure there, and we got the ‘Best Pitch’ award in 2011. Most importantly, we came to know and meet different funding bodies and commissioners closely and they also came to know about our idea. All together, it was a good start for the project.

EDN: Are You Listening! is at the moment having a successful festival life. Are you distributing the film yourself or how do you work with that?

SA: Yes, the film was premiered at Dok-Leipzig as the opening film. Later it was also in the ‘Official Selection’ of IDFA, followed by winning the ‘Grand Prix’ in Cinéma du réel, Paris. Very recently it was screened in the Globale Film Festival in Berlin and later this month it is due in ‘International Competition’ of Abu Dhabi International Environmental Film Festival. Then it will be in Munich Dok Fest, and in UK as well.

I believe, distributing a film is completely a different ball game than producing or directing it. Thus we are very happy to have Cat&Docs on board as our sales agent for Are You Listening!.

EDN: Has the film been sold to international TV channels?

SA: Not, yet… but it is due to the delay of having the shorter versions ready by us. Today apart from the 90 minutes festival version, we have two shorter versions of 75 and 57 minutes. Now with these versions we are very hopeful to breakthrough to the international TV channels pretty soon.

EDN: Last but not least - what lies ahead for you and your company?

SA: With the changing time and a developing taste for creative documentaries all around, we envision a promising future for us and our company. We believe there is always room for a fresh storyteller and we believe we are one amongst them.

Search among the many EDN members

Enter your documentary for the Grierson Awards

Highligt of documentary festival deadlines in May