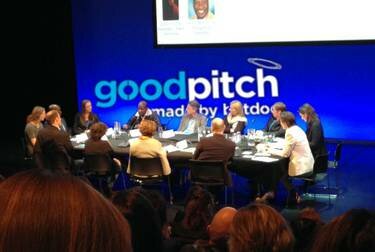 On Wednesday, 25 March 2015, EDN had the pleasure to be invited to the “Good Pitch Europe” session, which took place in the stunningly impressive Opera House of Oslo. It was actually the very first time that I personally attended a Good Pitch presentation and – believe me - it was time well spent. I send kudos to the organization and to the local organizers for an event perfectly run.

Through other channels you will find more detailed information about what happened during the day but here I want to share some of the thoughts, expressed in the opening speech by Cara Mertes, Director of JustFilms, Ford Foundation.

This is what Cara shared with the audience:

“Eight years ago, Good Pitch launched in the US, at the beginning of what we in the US call the Great Recession. This is not a coincidence—Good Pitch, as you will discover, is a frontline response to the power of independent film in our contradictory contemporary world; a world which is suffering the consequences of rising inequality, and hungry for the stories our filmmakers spend years creating. This appetite is growing, as the complexity of our global challenges rises. People understand that these stories help us see what is too often hidden and hear from those who are ignored at our peril. At heart, Good Pitch is our effort to support these films by spreading the message that extraordinary independent films can help change the world for the better. Through them, we can see connections between issues and between each other—these films can open pathways to transforming how we live our lives.

Good Pitch does not exist in a vacuum. Many of you here are longtime funders, curators, producers, mentors, and broadcasters of film and you understand the reach and impact that stories told through film can have. Others of you are human rights workers, lawyers, civil society leaders, government and business leaders and members of the media. Some of you have supported the films that you will be presented here today, for the independent film world is a global network of funds, institutes, film festivals, foundations, distribution platforms and government and corporate entities; all bound together through their efforts to raise up these stories of the vulnerable, the courageous and the disenfranchised.

For all of us here in this inspiring setting, through the course of this day, you will discover for yourselves that we are not just here to discuss films; we are here to talk about humanity, and film is our invitation to have brave, bold, improbable and inspired conversations.

It is not a coincidence that Good Pitch Europe would come to Oslo first. The Nordic countries host some of the world’s most accomplished filmmakers, most robust film institutes and funds, and most dedicated documentary broadcasters. It is also home to one of the Nobel Prizes shared with Sweden -- the Nobel Peace Prize—a prize that itself was created to offset humanity’s proven ability, in just a few hundred years of recent history, to be capable of destroying its home planet. The Nobel Peace Prize is awarded to recipients who have spent their lives working for things like peace and security, human rights, women’s leadership and agency and efforts to raise awareness of climate change. These are the very topics our intrepid filmmakers are capturing and bringing to the world.

In our globalizing world, economies transcend borders, and violence and corruption follow. Injustice often prevails. When capital can migrate but people can’t, when women and girls are killed just for speaking out, when, as Greece’s Finance Minister Yanis Varoufakis says, banks can be bailed out, but entire nations of people can’t be, when climate disruption threatens our very societies, we understand that the stakes have never been higher. Film may seem like a small contribution to changing the world, but we know that people are the key, and the act of filmmaking and film-watching can itself be an act of justice. “


In my opinion these ideas make a lot of sense and I believe they inspired and gave hope to many a documentary filmmaker in the (packed) room. I also dare to hope that these words will travel and reach the hearts and the minds of those who have the power to support documentary filmmakers by providing production funds and by making available the distribution platforms that are the natural habitat of well-made documentaries. Today the most important of those channels – public television – seems to consider music, entertainment and sport as their main focus, a decision much to be regretted and lethal in the long run.
This having been said, I should emphasize that in the audience and in the panel there were representatives of the usual suspects among the European broadcasters, who spoke some very uplifting words about the importance of documentary on public TV and about their intention to continue to defend the genre. Let’s hope that these colleagues are not the last of the Mohicans in the Wild West of the media environment.

What I mostly remember from the day is the fact that documentary filmmakers should not count on television alone anymore to reach their audiences and to share their work. Very innovative ideas have been presented about how to bring films to the viewers and how to make them into instruments of social change. Even if most of us are still searching for the right way to make this happen, it is clear that the hierarchy within the distribution system is being altered and that new forms of cooperation are not only possible, but will become indispensable soon. Is this a challenge? Certainly, but one to be tackled with energy and zeal and both of those were abundantly present in the Oslo Opera hall.