3 points of action and make us work! 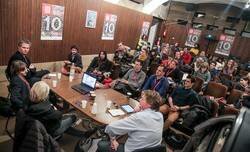 I hope this finds you well.

Did you take a good start in 2014? Do you still remember your New-Year’s resolutions or have you already decided to postpone them to 2015? Anyhow, it seems that 2014 will be full of challenges.  I’m not referring to the huge political events on the international stage (Ukraine, Venezuela, Syria, Egypt, Uganda…), although I’m convinced that many of you are dealing with them in your ongoing projects, but for this blog I limit my attention to our own environment; the world of documentary film makers.

Item # 1 on the agenda has to be the Creative Europe Programme that now has been officially launched. We have just passed the deadline for the first call for proposals, which means that many of you must have been writing until the very last moment, before pushing the “send” button and start hoping for the best. It took me a good day-and-a-half to carefully read all he guidelines and I think I’ll need another one to go through them again, making sure I really understand all the finesses. We all agree that nothing is perfect in this world, and I’m sure that the Media policy makers tried to be fair while creating the new programme, but in this case I did stumble upon some new rules that I find difficult to accept. Some of my remarks are about details, other deal with issues that are of a more serious nature. I’m writing this text in Zagreb. Last Thursday, I had the pleasure to preside a meeting with film makers from the S.E.E. region, representatives of local Film Centres and the Croatian Creative Europe-Media Office desk. These people were worried, very worried. They very much had the feeling that under the current guidelines, they will be the natural born losers. In the coming weeks we will analyse the situation more into detail, and if indeed that fear would be confirmed, action will need to be taken.

Allow me to repeat a request that I’ve already made a couple of weeks ago; if you have remarks about the new guidelines – now that you’ve had the time to read them and put them into practice – please let me know how you feel about them. I have the intention to bring your reactions together in one document and inform the Media Unit and the agency about your worries, questions and suggestions and to talk them over with the persons in charge.

Item # 2 is an initiative that EDN wholeheartedly supports. The Culture and Media Agency Europe, in collaboration with the European Think Tank of Film and Film Policy are carrying out a major study on film literacy / film education in European schools for the Media Unit of the European Commission. The research is being conducted by a consortium, composed of industry stakeholders and experts, European school networks and academic research experience in media literacy and intellectual property rights. The study will cover the 28 EU-member states, EEA member states and Switzerland. (Although as a result of the recent referendum, I doubt whether this country will stay on the list…)

The consortium’s objectives are to identify and analyse the current situation concerning the use of film and other audio-visual content in primary and secondary schools; to identify good practices and obstacles for teaching film literacy and to provide the European Commission with recommendations on how to strengthen its work in the context of film and media literacy policy. The consortium is now collecting data and information from stakeholders across the industry. The consortium is aiming at acquiring a complete picture of the initiatives and activities carried out across Europe and for that purpose have set up a survey. We at EDN, we believe that this initiative could lead to the creation of a new market for documentaries and to a reinforced position of the genre. Therefore I would like to ask you to take out 10 minutes of your busy schedule and complete the on-line survey. To access it, please go to:
English version: https://es.surveymonkey.com/s/FILMED_Private-companies
Version française: https://fr.surveymonkey.com/s/FILMED_Entreprises-privees

Item #3 that we need to work on is the potential change of the copyright rules in Europe. I have to admit that at this moment in time I don’t have enough information about the whole plan, but several members have shared their worry about it. I’ll start getting information about it and will make sure that you are kept updated.

By the way, have you visited the online version of Dox Magazine yet? (www.doxmagazine.com). For those who like a laugh, over the past week I’ve posted a blog from the Zagreb Dox Festival, allowing you to find out what your director has been doing there.

To wrap up: although my “to do” list is long and many items on it have to be dealt with under time pressure, I have decided to spend a large amount of my time during the first half of the year to travel, to meet EDN members and to get a general feel of the atmosphere in documentary land. This has taken me to India (DocEdge, Kolkata), Serbia (The Magnificent Seven, Belgrade), Germany (Berlinale, Berlin), Croatia (ZagrebDox) and in the next weeks it’ll take me to Czech Republic (Ex-Oriente Workshop), Brazil (Rio De Janeirp, Rio Content Market), France (Archidoc and Cross Video Days, Paris), Switzerland (Visions du Réel, Nyon), Bulgaria (BDC, Sofia) and Israel (Tel-Aviv, DocAviv). Also the other team members have spent quite a lot of time outside of the office and away from their families, participating in the many events and workshops they successfully co-organise, moderate and run. Critics might challenge us, asking whether this really is the best way to perform our (more specific: my) duties, and my answer is unquestionably “yes”. I discovered that it’s very important to keep a finger on the pulse of our community and one cannot do that behind a desk alone. The valuable information we gather during the numerous conversations will help us to define the main focus points for EDN’s action plan for the coming years. For action will need to be taken. We cannot just sit and nestle ourselves complacently in the hope that what worked well in the past will also work in the future. It won’t: the media world is facing major changes and we’ll have to stand up and face them. You are the one’s who will have to make it happen, but EDN is there to help you do it. Therefore: stay in touch, inform us, make us work!

Looking forward to hearing from you.
Paul Pauwels
Director EDN