Please enter your username or email address. Instructions for resetting the password will be immediately emailed to you.
Return to login form

You need to join EDN in order to get full access to the EDN downloads section including links to documents and files relevant to the international documentary sector. A limited selection of documents is available to the general public.

Here you can JOIN EDN! 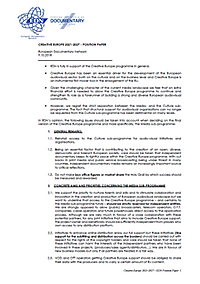 Description: In this position paper on the evolution of the Creative Europe programme from 2021 to 2027, EDN states its views on the role of the programme for the documentary sector and suggests a number of modifications in order to improve the situations of documentary professionals working in the European audiovisual markets. 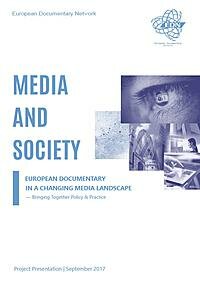 Description: With 'Media and Society — European Documentary In a Changing Media Landscape', EDN has launched a collaborative initiative with a select group of partners from the documentary industry and the academic sector with the aim to undertake a thorough analysis of the documentary eco-system and to present conclusions and recommendations in a White Book to be published in 2018. This PDF contains the project presentation and roadmap illustrating the objectives and milestones the iniative is planning to achieve.

Statement of Support for Croatian Filmmakers 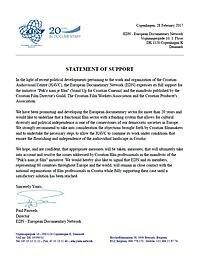 Description: In the light of recent political developments pertaining to the work and organization of the Croatian Audiovisual Centre (HAVC), the European Documentary Network (EDN) expresses its full support for the initiative "Puk'o nam je film" (Stand Up for Croatian Cinema) and the manifesto published by the Croatian Film Director's Guild, The Croatian Film Workers Association and the Croatian Producer's Association. 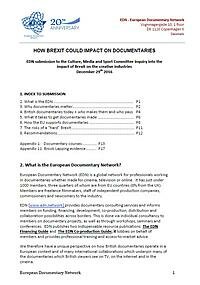 Description: In 2016, the Culture Media and Sport Committee in the UK launched an inquiry on the potential impact of Brexit on specific industry sectors in the UK. EDN has responded to the call with this submission which addresses key factors affecting the documentary industry in the UK and its links to the Creative Europe programme. The document has been drafted in collaboration with Whicker's World Foundation, Sheffield Doc/Fest and InFocus Productions.